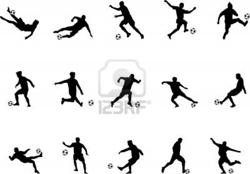 At the U6-U8 levels the main focus is dribbling, ball control and body control.  The children playing in this age group are not as familiar with team play and the concepts of field positioning as when they get older (however they do know the difference between offense and defense so don't neglect that).  So we want to focus on foot agility and ball control concepts, rather than passing.  Here are some games that address that focus.

All players in a random confined space, like the center circle or the penalty box with a ball.  Have players dribble and control the ball without touching other players.  While they are moving call out a body part (elbow, knee, head, etc) The players must immediately stop the ball with that body part.

OFF TO THE ZOO

Players move around with the ball imitating an animal the coach calls out.  Be sure to take suggestions of different animals.  Let the kids show you how an elephant or a snake would play soccer.  This drill improves body control, balance and agility.

Poition all players but two on the end line.  The coach and the two players join hands and start as the Glob.  Players run from one end of the field with their soccer ball to the other without being tagged by the Glob. This drill teaches the kids to work together as a team to achieve common goals.

Players hand the coach the ball, one at a time.  Coach throws the ball in different directions.  Players must retrieve the ball and dribble it back to the coach, but the coach does not remain in the same place on the field.  This drill teaches the kids to keep their heads up while dribbling.

Players dribble in a confined space like the center circle or the penalty box.  The coach holds up a red card or a green card and players stop or go based on the color of the card.  You can also hold up fingers to indicate what speed the players should be dribbling. (1= slow, 2=medium, 3=fast, etc)  This drill also teaches the kids to keep their heads up while dribbling.

Players dribble in a confined space while pretending they are magnets.  Whenever they get close to each other they must move away in the other direction as quickly as possible.  This drill teaches ball reversal, agility and body positioning.

Players dribble the length of the field from end line to end line while trying to avoid their ball being kicked out of bounds by the "shark" coaches.  Once the minnow looses their ball to the shark, they become sharks.  This drill teaches the players the importance of keeping the ball close to them for increased control and possession.

Play a regular scrimmage with goals at either end of your field.  But instead of just one ball introduce 2 or 3 balls into the game.  Add additional goals for more excitement.  This game will get them to practice individual and group tactics on offense and defense.  Plus it keeps all players busy during your scrimages.

Players dribble the ball along the perimeter of the circle or the penalty box.  On coaches signal players cross thru the middle of the area without touching each other.  You can split up the group by creating teams or numbering players "1's" and "2's".  This drill teaches the players to control the ball through traffic.

Set out cones in a confined area. Have players dribble ball to cones and pick them up without the ball rolling away from them.  This game cam be played individually or as a team relay.  One direction picks up the cones, the other direction sets them down.  This drill teaches the players ball control.

MONSTER IN THE MIDDLE

Players dribble in a confined space.  Coaches act like monsters that want to eat soccer balls.  This drill helps teach the kids to shield the ball to maintain possession. 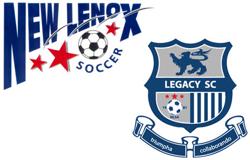 At the U8 level players can begin learning how to pass and how to deliver the ball in stride to teammates, but coaches shouldn't put very high expectations of strategic passing.  Some passing games that teach players how to pass include the following:

In a large area, like half the field, select one player to be "pac man" and give the player a ball.  That player must hit other players in the feet or below the waist.  Once a player is hit, they get a ball and join the first player dribbling around the field trying to hit their teammate's feet.  This drill teaches the players where to pass the ball in order to make good accurate passes in stride of the target.

Players line up in two teams near the middle of a field or half field.  The soccer balls are arranged in the middle of the two lines.  The coaches call one the name of one side.  When called that team collects a ball with their feet and attempts to hit the players on the opposing team below the waist while that team tries to run to the end line or sideline before getting hit.  Alternate sides until one side wins.  This drill teaches players to make accurate passes to teammates in stride.

This is a normal short sided game with the exception that players can only touch the ball a limited number of times.  Then they must go and reset themselves at a cone, which are placed around the perimeter of the playing area.  Three to Four touches is a good starting point and coaches can work down as age and skill level rises.  This drill forces players to move away from the ball and position themselves for reception of a pass as well as forcing players to pass.